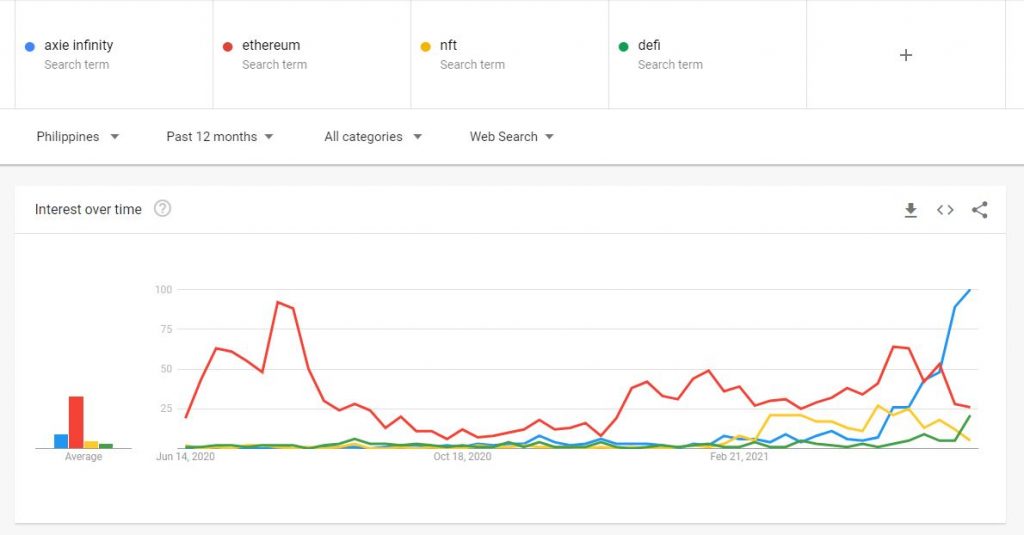 Search interest for Axie Infinity increased significantly for the past 12 months in the Philippines, overtaking Decentralized Finance (DEFI), Non-Fungible Token (NFT) and even Ethereum, according to the latest data from Google Trends.

Google Trends normalizes search data to make comparisons between terms easier, which also includes irregular search activity, such as automated searches. Every search result is also normalized to the time and location of the query. It may not be indicative of actual monthly search volume but it reflects growing interest for a certain topic or search term.

Data confirms that search interest for Axie Infinity began to rise significantly last May 2021 when Play-to-Earn, a mini documentary funded by Yield Guild Games and directed by Emfarsis that follows several Filipino who are making a living while playing the game, was released.

The mini-documentary series is now garnering attention internationally. The two versions of the documentary on Youtube now have a combined 250,000+ views. It has also been featured in CNBC, VentureBeat and local publications like Spin, Esquire and Inquirer.

In the Play-to-earn documentary, Leah Callon-Butler together with Nathan Smale, traveled to Cabanatuan city and interviewed Filipinos who are earning from playing Axie Infinity. The documentary was inspired by an opinion article written by Leah on Coindesk last August 2020.

It is not surprising to see that search interest in Cabanatuan City, the fifth-most populous city in Central Luzon, had the most search query about Axie Infinity.

It should be noted that search interest does not equate to actual players as evidence suggests that there are Axie Infinity players in other cities and tiowns in the Philippines.

The Play-to-earn documentary also showed the stats of the players of Axie Infinity in the Philippines:

Still, Google Trends shows that when looking at per region data, much of the interest is in Central Luzon, where Cabanatuan is.

Sky Mavis, the gaming startup that developed Axie Infinity, secured $7.5 million last May from investors including Mark Cuban. In a statement, the billionaire alluded to the game’s engaging content “that you want to play for hours on end”

Sky Mavis also recently made its first technical hire from the Axie community – Seuchenhund from Axie Zone, a popular Axie website. Seuchenhund will be building and refining documentation for third party developers and creating grants and builder programs.

This article is published on BitPinas: In the Philippines, More People are Searching for Axie Infinity than DeFi, Ethereum

The post In the Philippines, More People are Searching for Axie Infinity than DeFi, Ethereum appeared first on BitPinas.


Go to Source of this post
Author Of this post: Sean Millare
Title Of post: In the Philippines, More People are Searching for Axie Infinity than DeFi, Ethereum
Author Link: {authorlink}

June 21, 2021
Ningxia strives to be France’s Bordeaux amid tariffs on Australia
1 min read

Ningxia strives to be France’s Bordeaux amid tariffs on Australia

Tax experts say diversity and inclusion is a ‘business imperative’

June 21, 2021
Why Polkadot is useful for this conversation about Cardano

June 21, 2021
Ningxia strives to be France’s Bordeaux amid tariffs on Australia
1 min read

Ningxia strives to be France’s Bordeaux amid tariffs on Australia